The vapours can pose a health risk for personnel aboard inland navigation vessels. Avoiding releasing harmful vapours into the atmosphere is also recommended for environmental protection reasons. In principle, the CDNI concerns itself with water protection, but an amendment to the Convention has extended its scope of application to include the release of vapours.

In June 2017, the Contracting Parties Conference (CPC) adopted a resolution amending the Convention on the collection, deposit and reception of waste produced during navigation on the Rhine and inland waterways (CDNI) and its Implementing regulation. This amendment will come into force six months after the final instrument of ratification, acceptance or approval has been deposited by all six Contracting Parties (see “Ratification status” below).

The amendment aims to introduce a gradual prohibition into the scope of application of the CDNI so that gaseous cargo residues (vapours) that are harmful to the environment are no longer released into the atmosphere. The vapours remain within the navigation tankers’ cargo tanks once certain volatile organic compounds (VOC) have been disposed of (see the relevant cargoes in “The three phases of a prohibition of degassing”). These residues need to be disposed of before loading the next cargo, when they cannot be evacuated into a tank ashore by means of a vapour recovery system.

A prohibition referred to in an associated scope of application can only be made effective by internationally harmonised regulations: local bans on degassing are not sufficiently effective and create a risk of “waste tourism”.

The Contracting Parties adopted these new regulations to establish the necessary procedures and facilities for receiving and handling these gaseous residues.

The impact study estimated that this amendment will enable 95% of harmful degassing into the atmosphere to be avoided within the geographical scope of the Convention. This is a considerable improvement both for the environment and for the sustainability of water-borne freight transport. 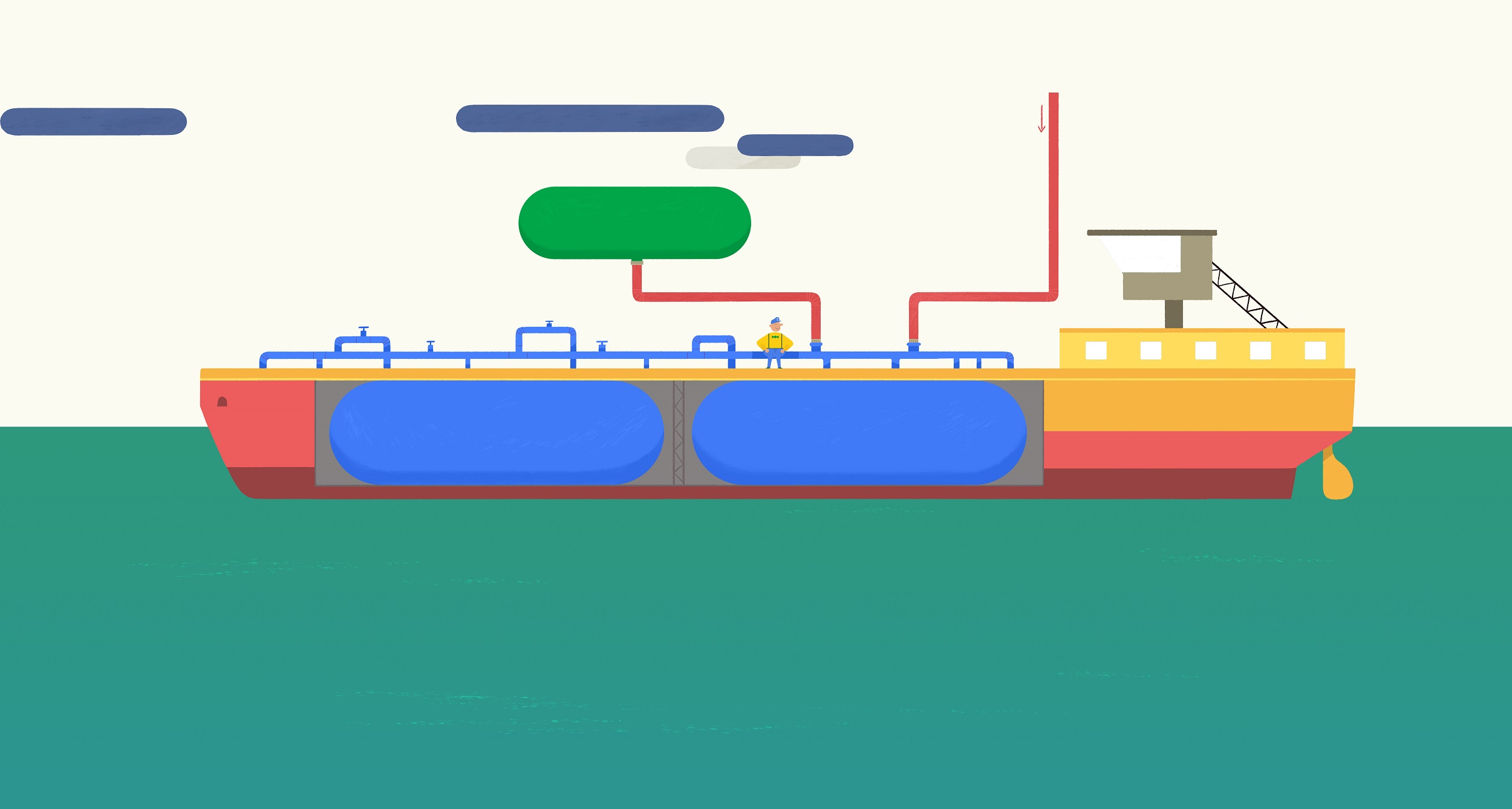 Source: image from the animated film on the 20 years of the CDNI’s existence, CDNI Secretariat

Text of the resolution and impact study

Text of the resolution

The three phases of a prohibition of degassing in the atmosphere

The ban on degassing will be phased in to enable development of the necessary infrastructure and appropriate logistics solutions, such as the use of dedicated or compatible means of transport.

The three phases of the prohibition of degassing are as follows:

The prohibition of degassing shall enter into force on the first day of the six month following the deposit with the depositary of the last instrument of ratification, acceptance or approval by the Signatory States (Belgium, France, Germany, Luxembourg, Netherlands and Switzerland).

) on 3 July 2020 (see press release).
The instrument was signed on 13 March 2020 by the Dutch Minister for Foreign Affairs but could not be deposited until the end of the Covid crisis.
Germany deposited the instrument of acceptance (

) on 25 August 2022 (see press release).
The ratification procedure is in progress in the two other CDNI States (France and Switzerland).

Degassing stations for gaseous residues are already operational. The Secretariat of the CDNI regularly updates an inventory of available stations, and publishes the list of stations open to the public (as at June 2021). The stations can also be geo-located on the CDNI’s map of reception stations.

Several, mainly European, financing instruments provide opportunities for financing research and development projects, preparatory activities or infrastructure, that are relevant to the CDNI and to degassing.

This is where the Secretariat of the CDNI publishes information on current and future opportunities.